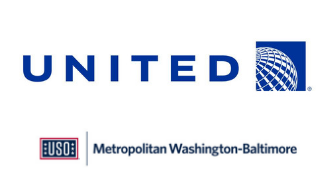 About United Airlines: T A leading passenger and cargo airline, United serves more than 230 destinations in some 30 countries from hubs like Chicago, Denver, Houston, Los Angeles, San Francisco, Tokyo, and Washington, DC. The airline, which also offers regional services via subsidiary United Express, operates a fleet of some 700 mainland aircraft. offering only the best and most comfortable in air travel, United Airlines as been a continued and longstanding sponsor of USO-Metro.