Salute to Service: On & Off the Field 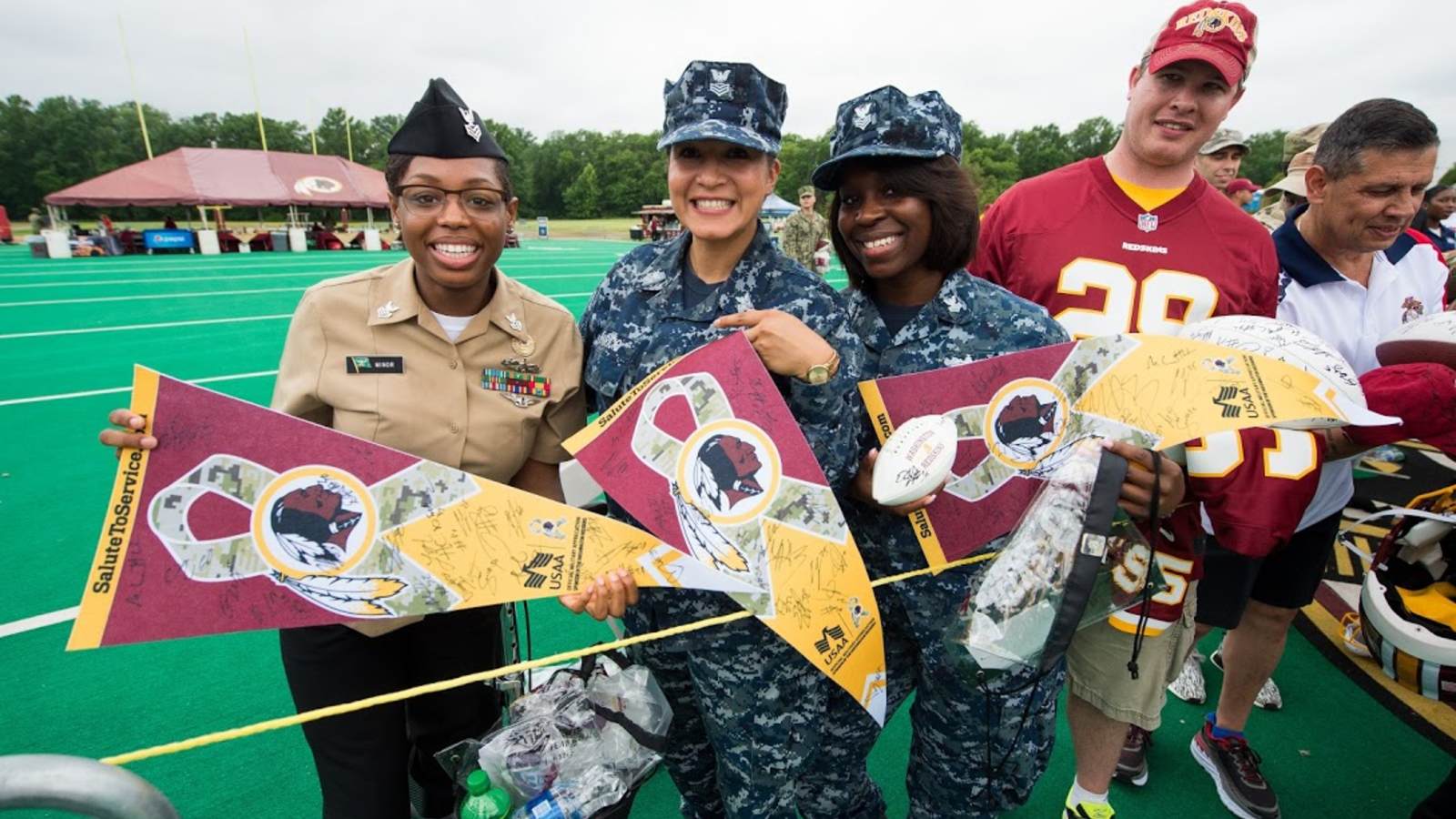 In a season of many ups and downs, the Washington Redskins rounded out their final game on December 30th at FedEx Field against the Philadelphia Eagles. It was a hard fought season with several unprecedented injuries throughout the year, yet one thing remained consistent each and every week – their support for the United States Military. The 2018-2019 season was yet another testament to the organization’s commitment to giving back to the men and women that protect our country.

Through the hard work and dedication of the Washington Redskins Charitable Foundation, Redskins Salute Club, and some incredible partners – the team was able to touch thousands of service members throughout the National Capital Region and honor hundreds of troops at FedEx Field.

USO of Metropolitan Washington-Baltimore is appreciative of the Washington Redskins partnership and their dedication to serving the largest military population in the country. Check out some of the 2018-19 Redskins Season Highlights both on the field ‘and on the base.’ 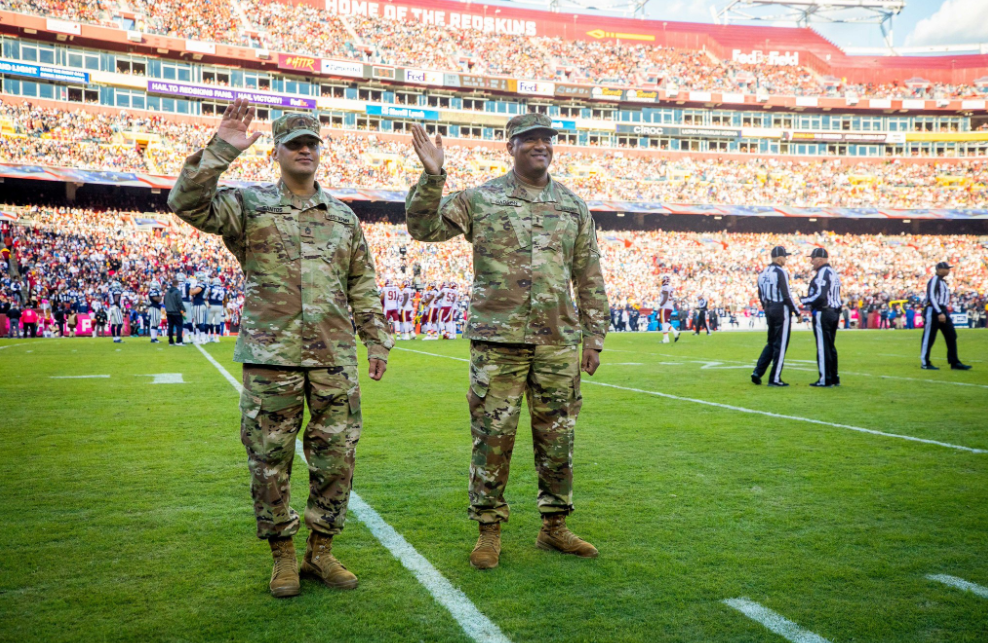 In the second season since its inception, the USO-Metro Club at FedEx Field hosted thousands of military families from all over the country for pregame celebrations and tailgate-like activities. At the club (open to all military and veteran families) it wasn’t an uncommon occurrence for USO-Metro volunteer hosts to greet active-duty service members in uniform. When asked, these service members would explain they were a part of a pregame military honoree production. The Redskins hosted three honoree productions for active-duty service members throughout the season.

FedEx Special Delivery This season, the Washington Redskins and FedEx teamed up to honor service members in our community that had demonstrated excellence and gone above and beyond expectation in their role. These service members enjoyed pregame warm ups on the field and were given a warm welcome by the home crowd as they were honored on the scoreboard screen. An emotional moment for individuals that have worked so hard. Thanks to FedEx for providing eight excellent moments this season!

USAA Salute to Service Moment Once again, USAA and the Washington Redskins teamed up to provide two service members every home game a warm “Salute to Service” welcome from the home crowd during pregame ceremonies. Being projected onto the scoreboard screen, the Redskins gave a moment to these service members every home game, and allowed the crowd to give them a standing ovation thanking them for their service. Thank you USAA for saluting our troops this season!

Redskins 53-Man Salute The Redskins Salute team welcomed 53 active duty volunteers to join them at each home game and participate in a 53-man salute at some point throughout the game. It was a moment for the entire stadium to stand and show their appreciation for men and women sacrificing so much so our country can enjoy football every Sunday. Thank you Redskins Salute for honoring over 425 service members this season! 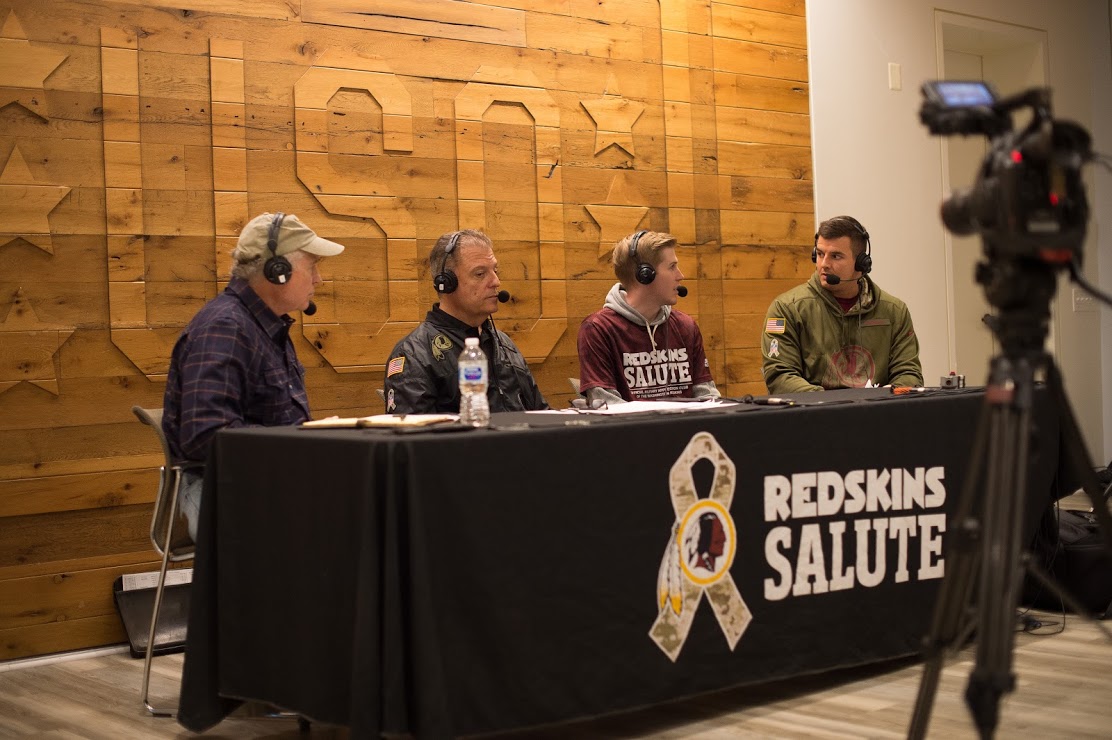 On November 6, 2018, the Washington Redskins brought food and entertainment to the USO Warrior and Family Center at Fort Belvoir alongside Campbell’s Chunky Soups. Well known Redskins Alumni hosted their weekly podcasts, including Rigoo the Disel, 26 Minutes with CP, and Cooley at the Park - all taped their podcasts with a live audience of active duty service members in the center’s multipurpose room.

Immediately following, service members moved to the kitchen where Redskin players - Tim Settle, Mack Brown, and Line Backer Ryan Kerrigan teamed up with USO-Metro volunteers to serve lunch to over 150 service members based on Fort Belvoir. Attendees were able to meet some hometown heroes, snapped selfies, grabbed a few autographs, and made memories. Thank you Washington Redskins for such an exciting event! 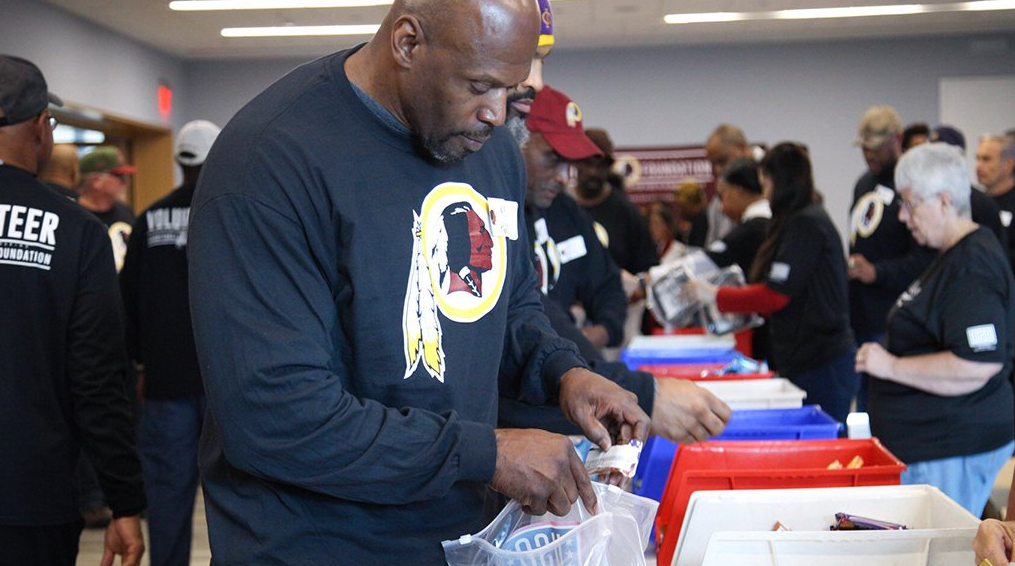 For a second consecutive year, Washington Redskins Charitable Foundation partnered up with Redskins Salute and brought over 100 Redskins Alumni and family members to USO Warrior & Family Center at Walter Reed Bethesda to Pack4Troops and serve lunch to troops coming from Walter Reed Medical Center. Alumni were able to tour the center and spend quality time with rehabilitating service members and military families from all over the country. The event was one for the books and a cornerstone component of Redskins Alumni Weekend!

The morning began with Offensive and Defensive players squaring off and competing to see which side could pack more USO Care Packages in under three minutes. Overall, after a tie, our goal was reached and 1,000 care packages for departing service members were packed. A wholesome event turned tradition, we can’t wait for next year!

For the second consecutive year, Redskins Salute and Microsoft teamed up to bring an NFL Madden tournament to our troops on base! This year, our team chose to bring this annual Madden Tournament to Marine Barracks Washington where over 20 Xbox One stations were set up and prepared for over forty marines. These troops would compete in a winner-take-all tournament. Tournament winner received an Xbox One game console and all participants received the Madden NFL 2019 video game compatible with either Xbox One or PlayStation 4 – special thanks to Microsoft.

Additionally, Mission BBQ catered the event – and Redskins players Jeremy Sprinkle and Casey Dunn stopped by to spend time with the Marines and test their gaming skills against the best! It was a morale boosting event for all participants – thank you Redskins Salute for another outstanding experience!

We can’t thank our partners with the Washington Redskins enough for your unwithering support this NFL Season, defining #SalutetoService in a whole new way!