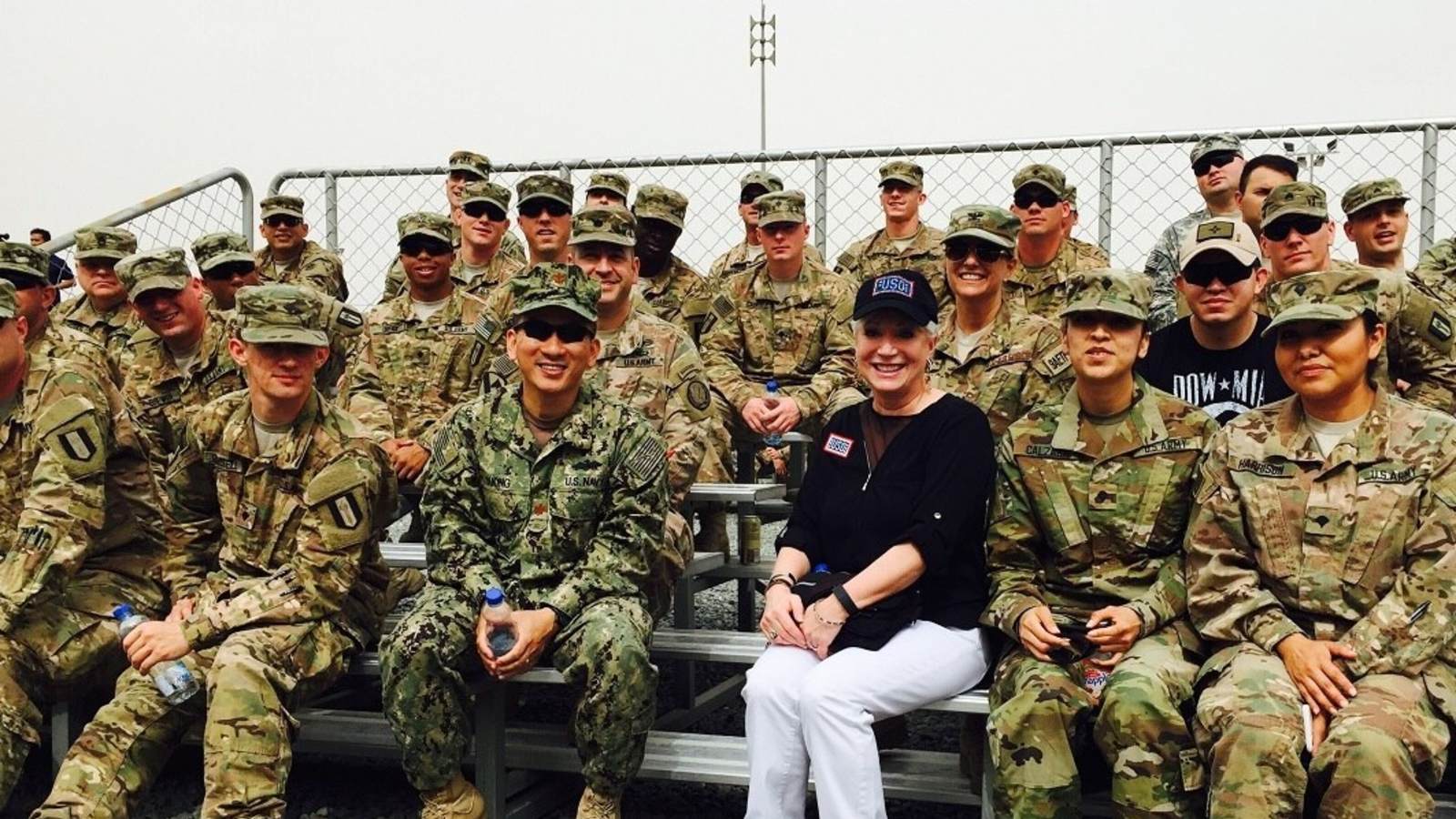 Leaves a legacy of commitment on military, D.C.-area nonprofit

After 45 years at the helm of USO of Metropolitan Washington-Baltimore (USO-Metro), Elaine Rogers is retiring from her role as president and CEO.

“I am honored I was allowed to serve this amazing organization for all these years,” said Rogers. “As I look back over the last couple decades, I am in awe of the truly significant and positive impact USO-Metro has made in the lives of literally millions of our nation’s military service members and their families.”

Hired by the local USO chapter in the summer of 1976, Rogers quickly rose to the rank of executive director by the following year and never looked back. Over the course of her storied career, Rogers grew the small staff of five employees to the current-day total of 35. She also expanded the footprint of USO-Metro to support 29 military installations across the National Capital Region with brick-and-mortar centers at six locations and airport lounges serving the four major airports in the region. USO-Metro provides programs and services to more than 300,000 service members and their families living in the National Capital Region and to the 150,000 active-duty troops who travel through the local airports. 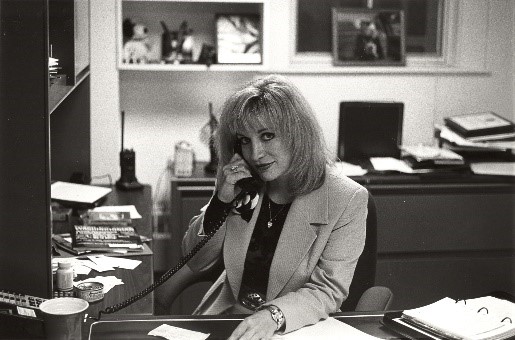 “Elaine Rogers will be remembered for the tremendous impact she has had on the USO, the military and their families for 45 years,” said USO, Inc. CEO and President J.D. Crouch II. “Her legacy is one of excellence, commitment and a desire to ensure our troops were always taken care of – whether they were close to home or deployed.”

Throughout her tenure, Rogers worked to grow private and corporate annual donations from an annual budget of $100,000 to over $10 million in cash, goods and services, while also overseeing the growth and development of a volunteer roster from 50 to more than 1,500 caring local citizens. Together, this dedicated cadre of volunteers, combined with program-focused management, allowed Rogers to establish a nonprofit that ensures roughly 90 cents of every dollar donated goes directly to programs and services for the military community in the region, ensuring a four-star rating on Charity Navigator.

One of Rogers’ fondest memories from her time with USO-Metro is having the opportunity to meet and work with entertainment icon Bob Hope, a personal hero of hers growing up. The list of celebrities Rogers brought to visit and entertain the wounded, ill and injured population at local military hospitals, as well as service members and their families stationed in the region is lengthy. Some celebrities include the likes of Tom Hanks, Billy Joel, Stevie Nicks, Jon Stewart, Robin Williams, Prince Harry, and Presidents George W. Bush and Barack Obama, to name a few.

For her tireless dedication to members of the U.S. Armed Forces and their families, Rogers has been recognized by the U.S. Army, Marine Corps, Navy, and Air Force with service awards and medals. She has been honored by the secretary of defense with the Outstanding Civilian Service Medal; by the chairman of the Joint Chiefs of Staff with the Distinguished Public Service Award; and by the Military District of Washington with the Dr. Mary E. Walker Award. Furthermore, Rogers was named honorary sergeant major of the Army in 2018, making her the first female and nonveteran. She was also bestowed the title of honorary chief petty officer by the U.S. Navy. Additionally, the Washington Football Team recognized Rogers with their annual Salute Award for her service on behalf of the military community.

While she may be stepping away from her executive role, Rogers will maintain a presence with the organization to which she dedicated her professional career and transition to the role of consultant. Commensurate with Rogers’ retirement, USO-Metro welcomes her successor, Lisa Marie Riggins, who has served as the executive director of the organization since September 2019. 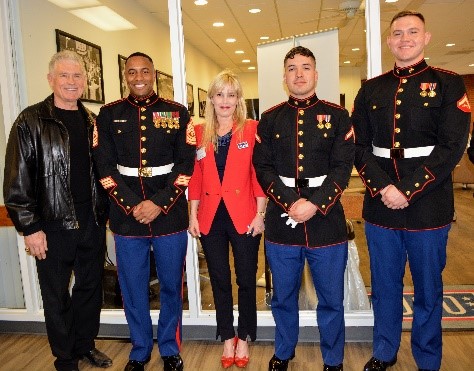 Riggins is an attorney who was raised in the military and lived the peripatetic life. After founding her own nonprofit, Fairness for Athletes in Retirement (FAIR), to support former NFL players, she realized the nonprofit space is where she wants to be.

“My husband and I have supported Elaine and the USO for the past 20 years,” Riggins said. “I know how impactful the programs and services have been for our service members firsthand. It is a privilege to assume this role and continue the work that has sustained the USO as a premier supporter of the military for 80 years.”

Dedicated to “serving those who serve, and their families” in Washington, D.C., Maryland and Northern Virginia, USO of Metropolitan Washington-Baltimore (USO-Metro) is a nonprofit 501©(3) organization chartered by Congress and trusted by the community since 1941. USO-Metro consistently earns the highest rating on Charity Navigator for outperforming most charities in its cause and exceeding industry standards. As a nongovernment-funded organization, it is only through the generous financial, in-kind and volunteer support of individuals and corporate partners that USO-Metro is able to succeed in its mission: to strengthen America’s military service members by keeping them connected to family, home and country, throughout their service to the nation. USO-Metro constantly adapts its programs and services at area military hospitals through its two Mobile USOs, six USO Centers and four USO airport lounges to meet the needs of our military. Signature programs and services include holiday programs, career transition programs, and caring for our wounded, ill and injured troops and their caregivers.

Designate CFC #63343 or United Way National Capital Area #8202 to contribute. For more information or to get involved, please visit USOmetro.org or connect on socials at @USOMetroDC.

The USO strengthens America’s military service members by keeping them connected to family, home and country, throughout their service to the nation. At hundreds of locations worldwide, we are united in our commitment to connect our service members and their families through countless acts of caring, comfort and support. The USO is a private nonprofit organization, not a government agency. Our programs, services and entertainment tours are made possible by the American people, support of our corporate partners and the dedication of our volunteers and staff. To join us in this important mission and learn more about the USO, please visit USO.org and follow us on Facebook, Twitter and Instagram.