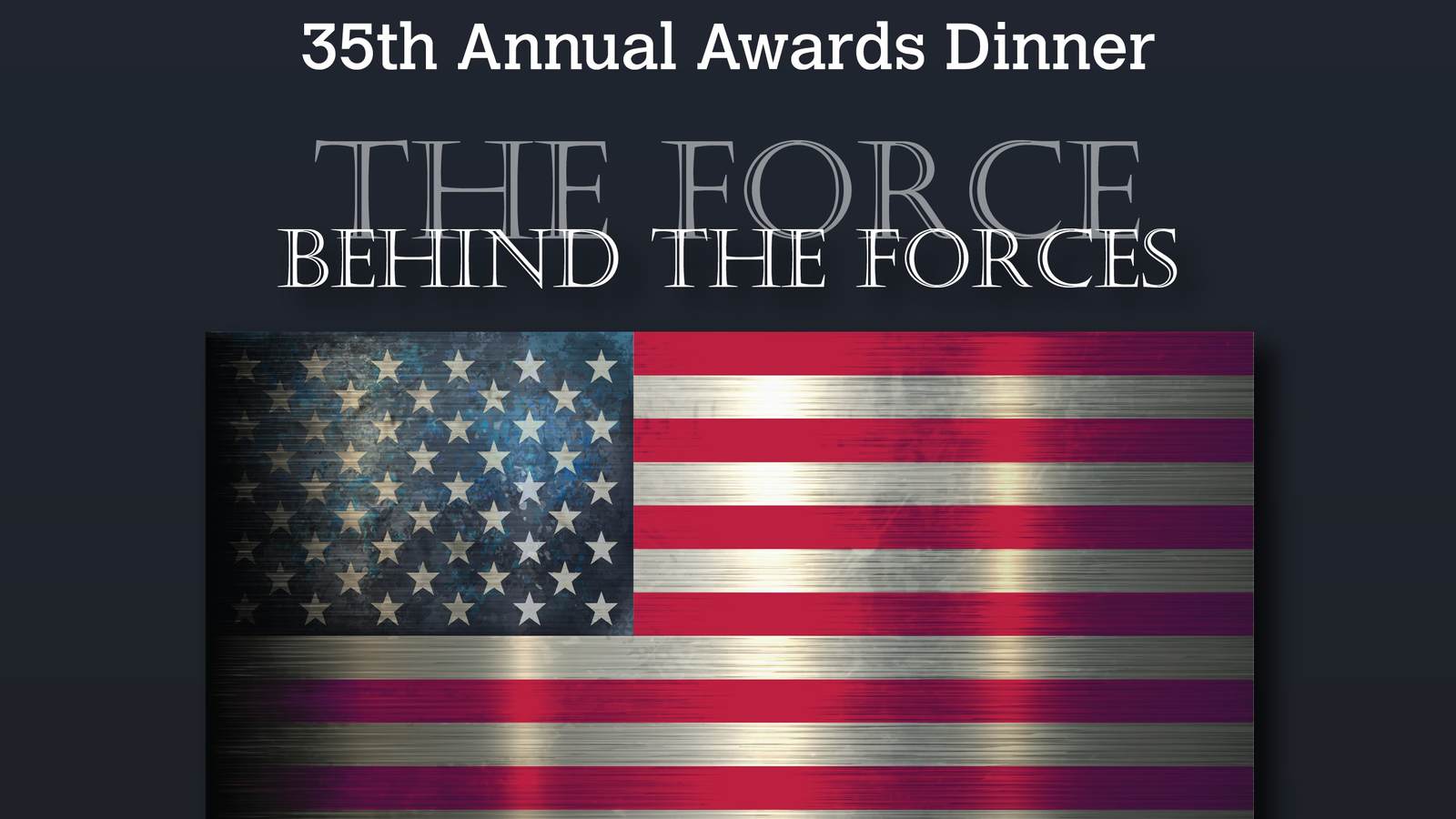 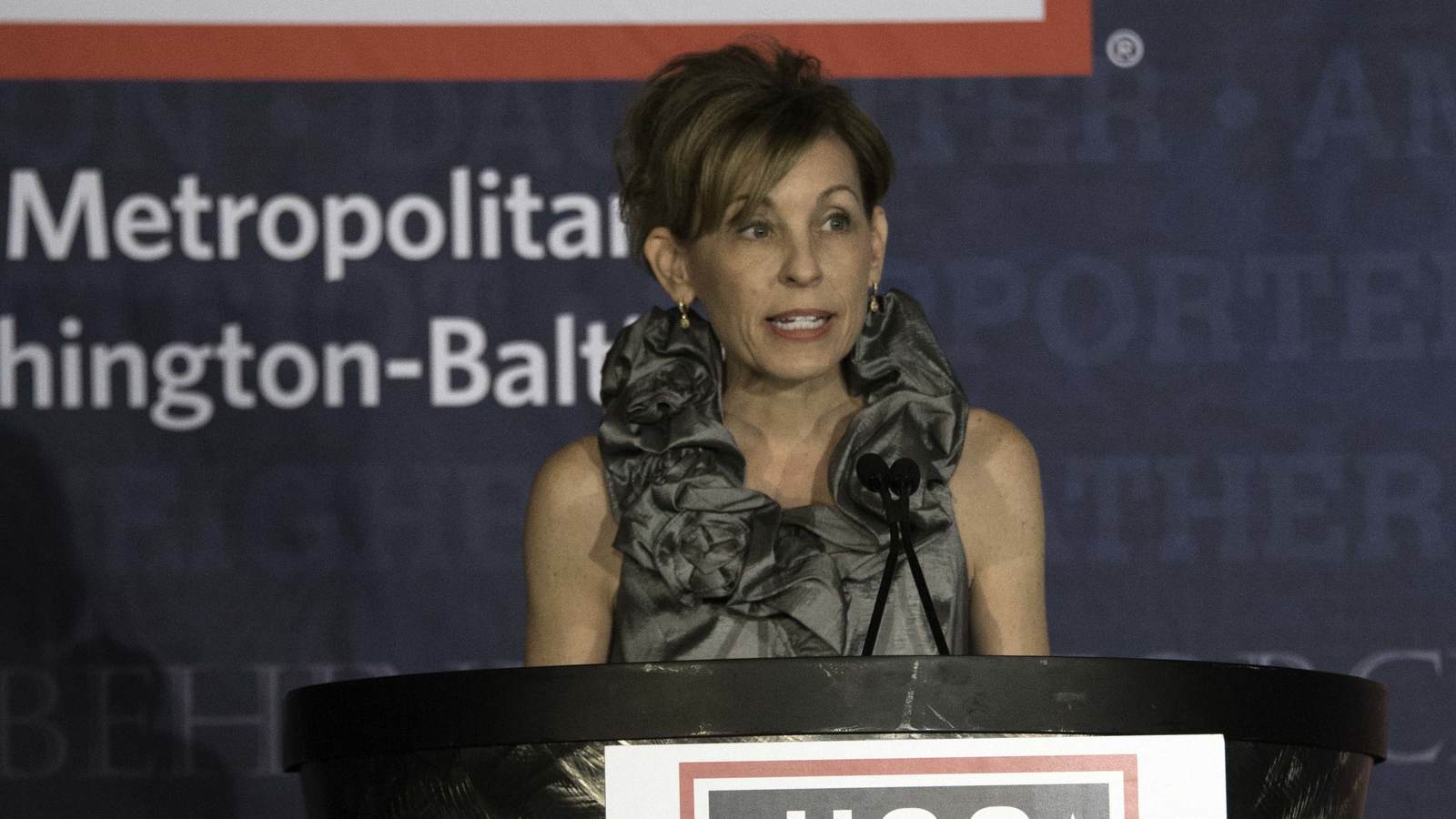 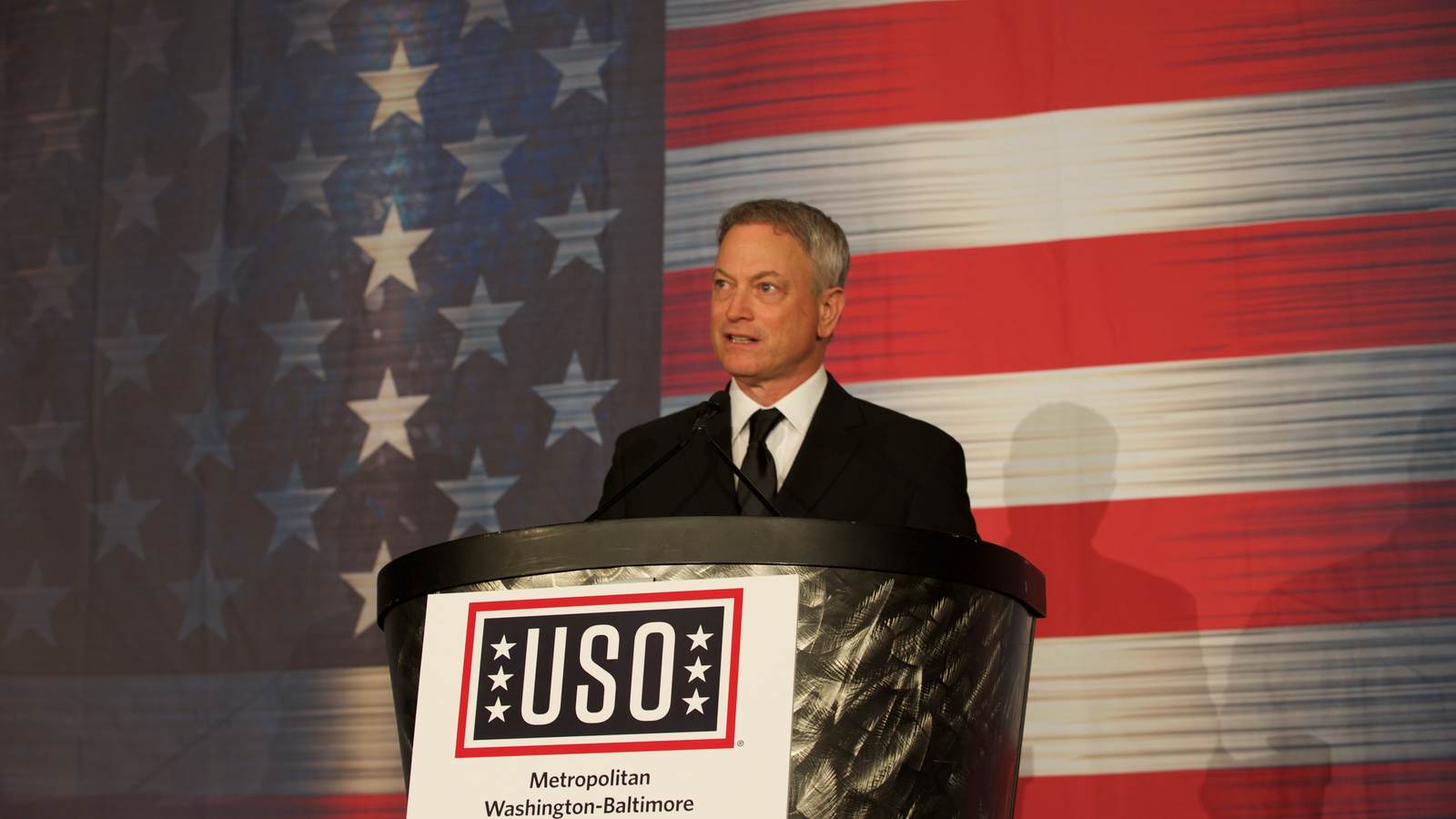 Actor and humanitarian Gary Sinise recalls visiting his father's military base in Washington, DC, as he receives the USO's Legacy of Hope Award at the USO of Metropolitan Washington-Baltimore's 35th Annual Awards Dinner, a Special Salute to Senior Enlisted Advisors in the US military, March 21, 2017 in Arlington, Virginia. USO-Metro Photo by Evin Planto 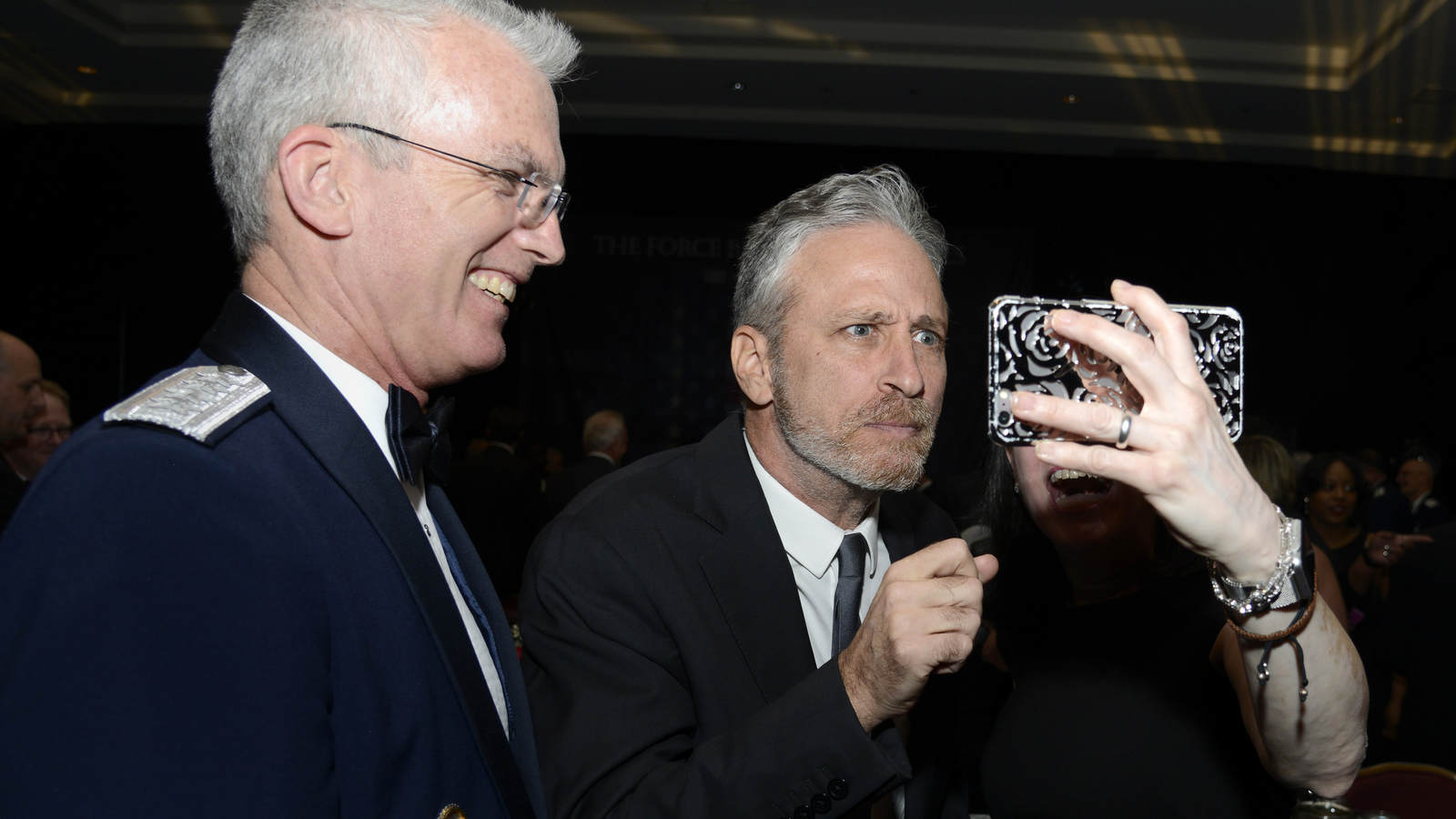 Comedian and Master of Ceremonies Jon Stewart (center) makes a video for US Air Force General Paul Selva (left), 10th Vice Chairman of the Joint Chiefs of Staff, during the USO of Metropolitan Washington-Baltimore's 35th Annual Awards Dinner, a Special Salute to Senior Enlisted Advisors in the US military, March 21, 2017 in Arlington, Virginia. USO-Metro Photo by Mike 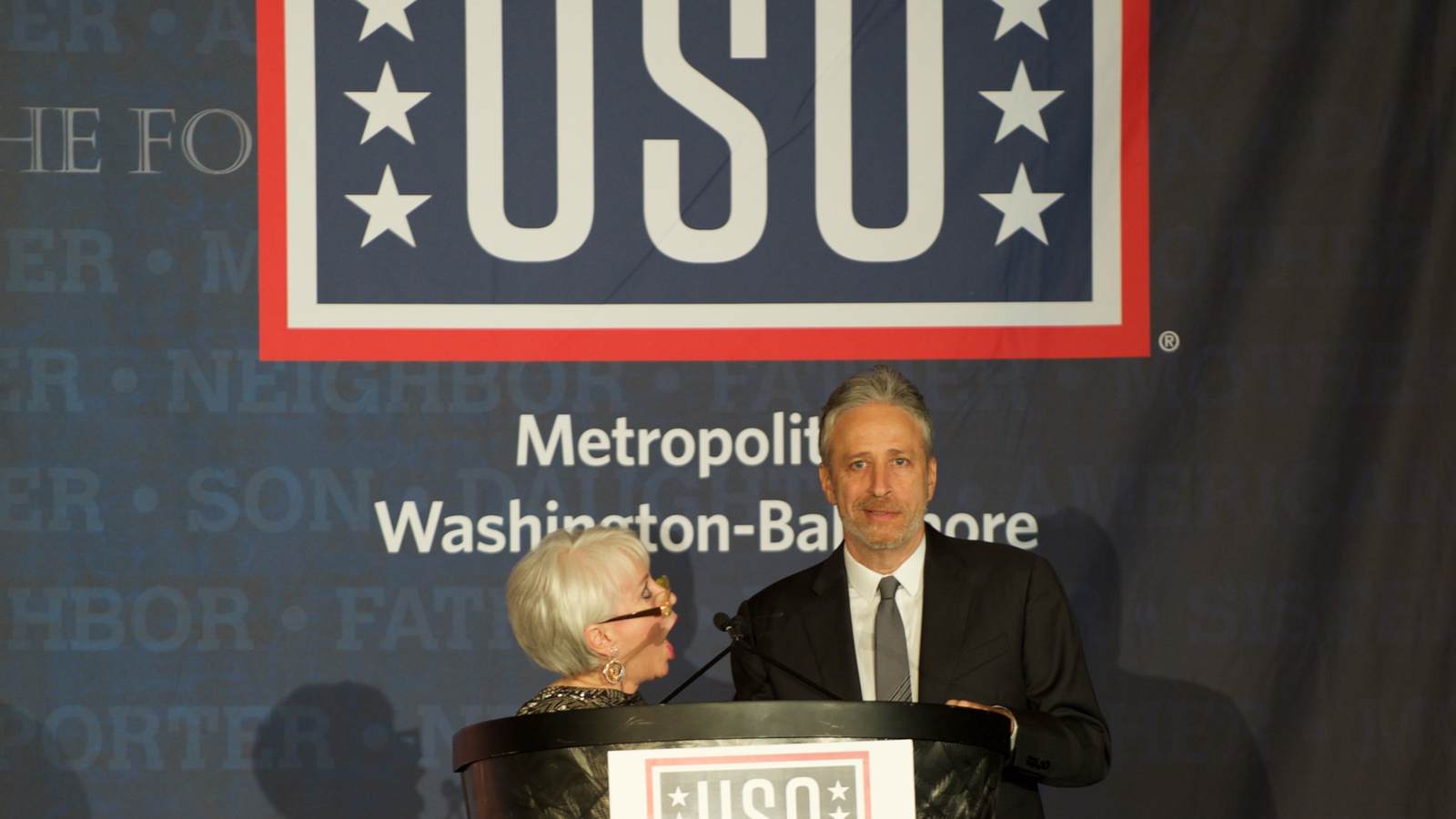 Comedian and Master of Ceremonies Jon Stewart jokes with president and CEO of USO-Metro, Elaine Rogers, as he presides over the USO of Metropolitan Washington-Baltimore's 35th Annual Awards Dinner, a Special Salute to Senior Enlisted Advisors in the US military, March 21, 2017 in Arlington, Virginia. USO-Metro Photo by Mike Theiler 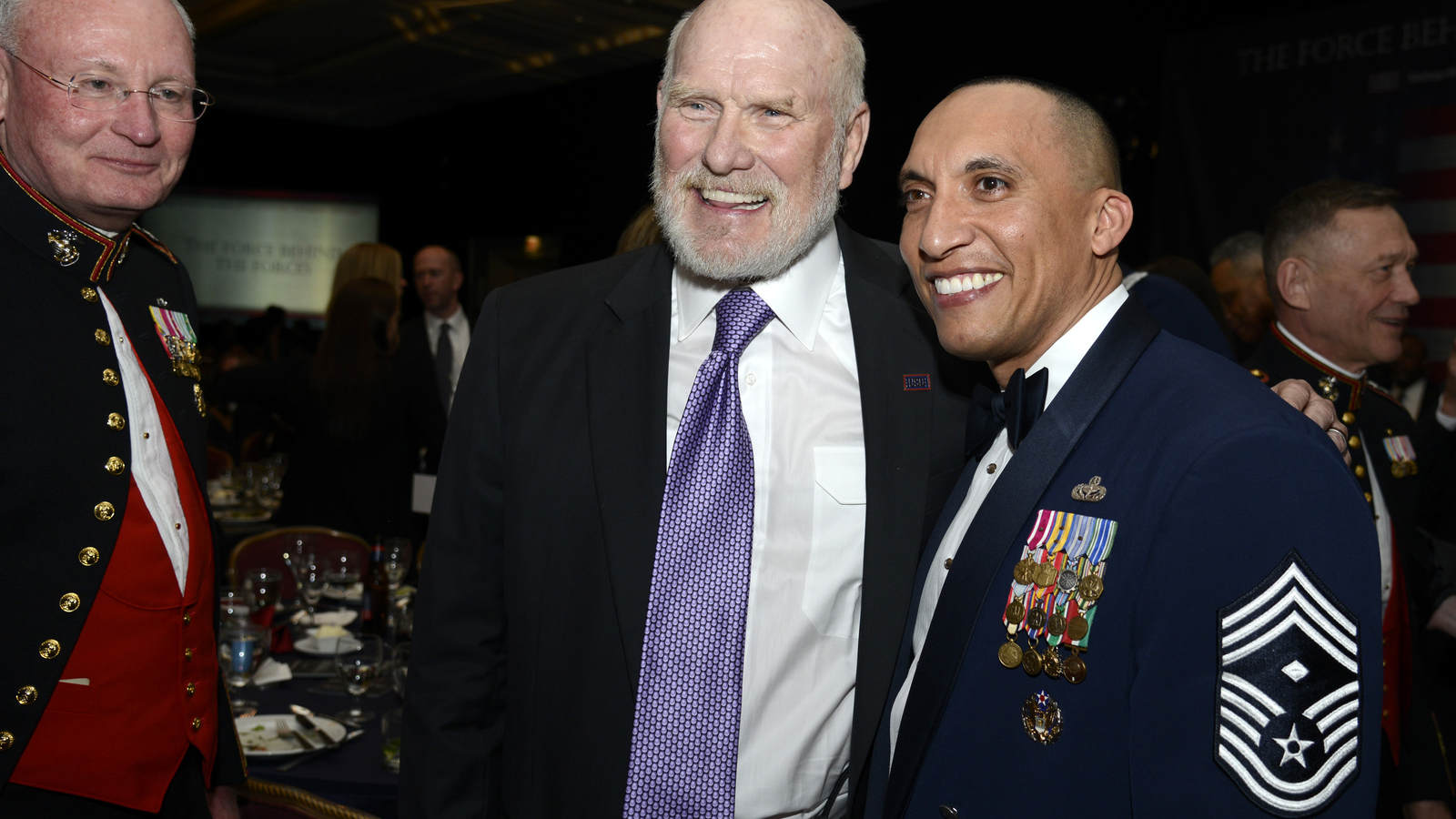 ARLINGTON, VA–(March 23, 2017) - USO supporters gathered as a Force Behind the Forces at the Crystal Gateway Marriott Tuesday night in support of America’s service members and their families. The special evening raised more than $1 million for USO Metropolitan Washington-Baltimore (USO-Metro) and called on guests to re-affirm their commitment to our nation’s men and women in uniform.

Boeing Executive Vice President Leanne Caret – Presenting Sponsor and Honorary Chair of the 35th Annual USO-Metro Gala – kicked off remarks for the evening by reflecting on her experience with and support of the USO.

“A friend of mine once told me your proximity to the fight doesn’t define your contribution to the fight,” Caret said. “I thank you for being here tonight, and ask that you join me in showing gratitude and appreciation for our honored guests, to all the supporters of USO-Metro and most importantly to the Force Behind the Forces.”

USO-Metro CEO and President Elaine Rogers took the stage to thank Boeing for its sponsorship early in the evening, and later surprised the audience when she revealed Caret provided an on-the-spot additional $150K donation to help USO-Metro surpass $1 million in Gala contributions.

“This has never happened at our Gala before,” Rogers told the audience of the on-site donation. “We are so thankful for Boeing’s generous contribution to USO-Metro and to the military members and their families who serve our great nation.”

After Caret’s remarks, Rogers invited comedian and USO supporter Jon Stewart to the stage to co-emcee the evening. Stewart brought light-hearted fun and humor to the night, and paused to compliment the Gala’s Force Behind the Forces theme in his opening remarks. “Tonight, we will be speaking about the ‘Force Behind the Forces,’ an idea I love by the way,” Stewart said. “Everybody knows that when you are in uniform, you can walk into a place and immediately command attention and respect, but boy the caregivers and the families of our fighting men and women do so much unsung, not seen for so long, and it’s just a wonderful thing that you (the USO) are recognizing that as well.”

The evening’s keynote speaker, Secretary of Homeland Security the Honorable John Kelly – a retired Marine Corps, four-star general – built upon Stewart’s enthusiasm for the USO and its legacy of support to service members and their families.

“The USO has been a part of my life since I enlisted and certainly through my officer years,” Kelly said. “The USO serves everybody in uniform and their families –past, present and future. It’s a phenomenal organization.”

After his remarks, Kelly welcomed the 25th Commandant of the Coast Guard Admiral Paul Zukunft to the podium. Zukunft introduced the first award in a series of special salutes to Senior Enlisted Advisors from each branch of service. Throughout the evening, each U.S. Service Chief called their Senior Enlisted Advisor and their spouse on-stage to personally recognize the pivotal role they play in shaping and defending our nation.

Chairman of the Joint Chiefs of Staff General Joseph F. Dunford, Jr. presented the final Special Salute award to Command Sergeant Major John Wayne Troxell who accepted the award on behalf of all the Senior Enlisted Advisors who serve in the Armed Forces.

“We accept these awards tonight on behalf of every Senior Enlisted Advisor across the Joint Force, who right now are leading men and women in harm’s way in more than 200 countries around the world,” Troxell said. “Our Senior Enlisted Advisors serve at the battalion and squadron level, in ships at sea, in major combatant commands, and right here in our nation’s capital, providing invaluable advice to our chiefs, our chairman, and those that are in command, responsible for executing the mission, upholding the Constitution of the United States and exacting the will of the American people.”

In addition to honoring Senior Enlisted Advisors, USO-Metro introduced a new segment titled “Service Moments” to honor family members and USO volunteers touched by the USO. The awards were presented to Patricia Ochan and Sgt. Jimmy Ochan, SSG (Ret.) Bill Lintner, and Naomi Jacobs – a mother of five boys whose husband Air Force Tech Sergeant William Scott Jacobs, who is serving in a remote overseas location, surprised the audience by making a guest appearance at the Gala while home on R&R.

“The programs I was able to participate in this year with my kids really helped me feel like USO-Metro and the American people had my back,” Jacobs said. “They were like hey, 'We know we don’t understand all the way, but here’s how we can help you, here’s what we can do to let you know that we appreciate the sacrifice that your family makes’.”

The first non-military award of the evening – presented by Vietnam Veteran and Super Bowl Champion Mr. Rocky Bleier – went to NFL Hall of Famer Terry Bradshaw who received USO-Metro’s Merit Award. The award is presented to individuals of outstanding talent who are dedicated to serving others through volunteerism. Bradshaw frequently volunteers his time to USO-Metro programs and overseas tours and has worked with the military to produce an awareness video on suicide prevention and mental health issues.

“Our military men and women have touched the Bradshaw’s for years; my dad was a Navy guy and my love for him and the Armed forces was something that came naturally,” he said. “I’m deeply touched, deeply honored – always will be and always have been, and will continue to support the men and women in the military if they will have me. God, bless you all, God bless this great country, and thank you for this wonderful honor.”

After Bradshaw’s remarks, guests enjoyed dinner and entertainment by Steve Amerson, a featured soloist with major symphonies in the United States and abroad including performances at the Hollywood Bowl and Carnegie Hall.

WWE’s Chief Brand Officer and USO-Metro Board Member Stephanie McMahon took the stage after dinner to honor USO icon Bob Hope and introduce the USO-Metro’s Legacy of Hope Award. Rogers and Dunford returned to the stage to present the award to actor and humanitarian Gary Sinise for his ongoing commitment to the USO and the nation’s service members. Sinise has traveled world-wide with his famous Lt. Dan Band, entertaining and raising the spirits of hundreds of thousands of service members. He created the Gary Sinise Foundation with the mission to honor America’s defenders, veterans, first responders, and their families, and has worked in support of our nation’s military members and veterans for forty years. He proudly accepted the award and shared that it was his families’ military service, his role as Lt. Dan in Forrest Gump and the terrorist attacks of Sept. 11 that inspired him to give back.

“I’ve been a blessed and privileged person to support the United Service Organizations, to call Elaine Rogers my friend and to do something good for the men and women who serve our country,” Sinise said. “We’ve played hundreds of concerts for our military, we’ve been all over the world, and I see the joy on the faces of the people we play for, the children of the families that we play for, the wounded in our hospitals that we entertain, the concerts we play for the medal of honor society and so much more throughout these years. That is a motivator, it’s an energizer, and it’s a blessing to be able to do some good for those who do so much for us.”

USO-Metro thanks Sinise, all its awardees, senior military officials, USO celebrity and military supporters and sponsors for making its 35th annual gala a great success.

“What an amazing evening of patriotism. I watched our guests delight in laughter while being moved to tears by the stories shared throughout the evening,” said Elaine Rogers, President and CEO of USO-Metro. “Boeing’s additional contribution left me speechless and beyond happy, especially considering that 90 percent of the net funds raised tonight will go directly to programs and services that benefit service members and their families. Without Boeing and all of our other incredible corporate sponsors, this major milestone of surpassing $1 million could not have happened.”