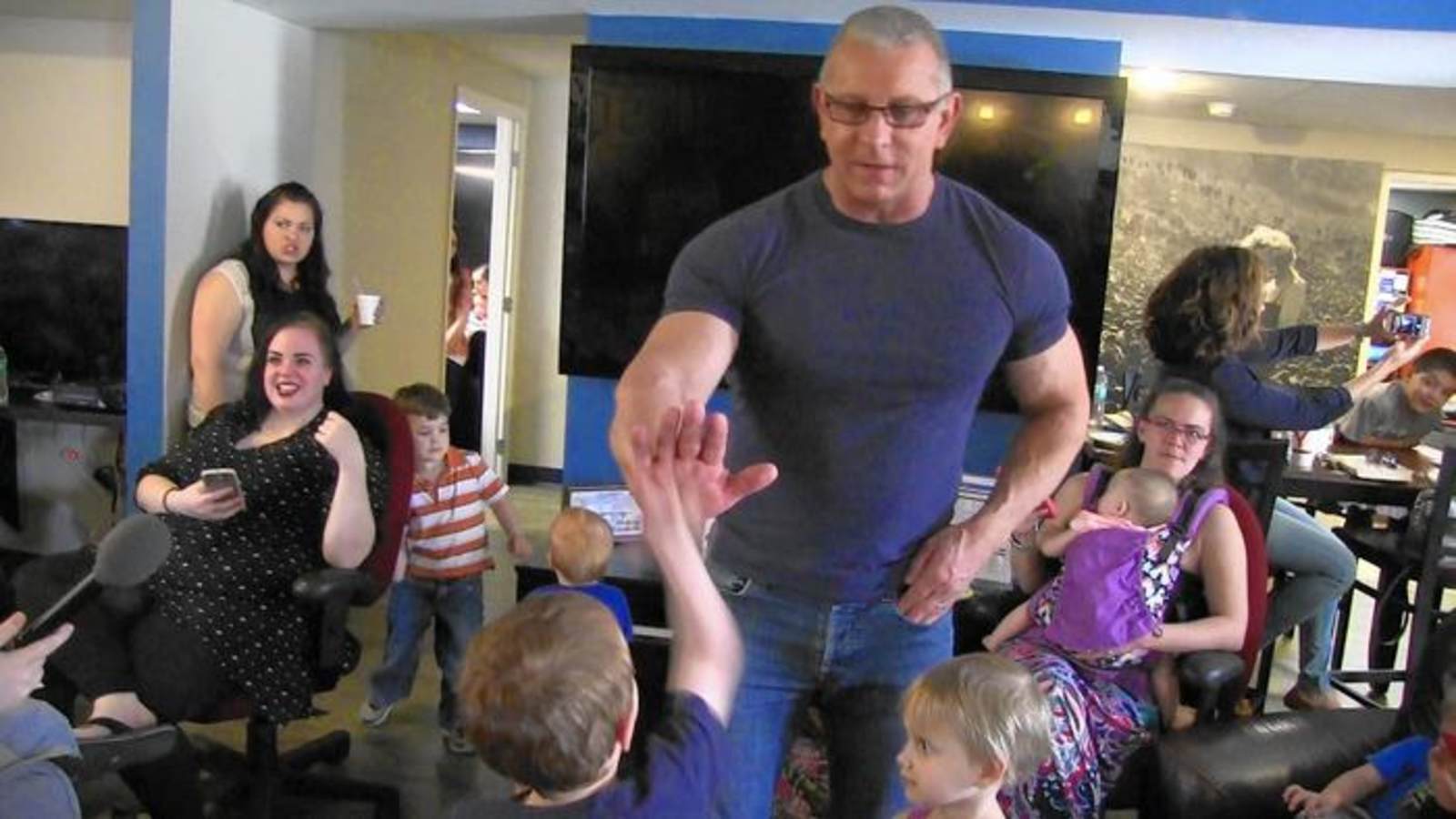 When celebrity chef Robert Irvine walked in the door at the Fort Meade USO Center on April 19, he was greeted by the screams and applause of adoring female fans.

“How is everybody?” asked Irvine, host of “Restaurant Impossible,” one of the Food Network’s highest rated shows.

Irvine spent an hour with 131 Fort Meade military spouses and their children.

“Thank you all for your service — it’s incredible,” Irvine said.

The celebrity chef praised USO volunteers who “contribute to great folks like yourselves.” He also hugged children and gave one boy a high-five.

Irvine spoke to the spouses about the importance of the Army’s Performance Triad, which focuses on nutrition, sleep and activity to improve the readiness and resilience of soldiers and their families. He also provided tips for cooking healthy meals.

The event was part of the USO’s spouse breakfast club, which meets at 9 a.m on the third Friday of the month. The club is open to all Fort Meade military spouses and non-school-age children.

Shawn Sabia, supervisor of the USO Center, said the purpose of the club is to “show our appreciation to military spouses for their sacrifice” and to give military spouses an opportunity to relax and mingle with their peers.

Irvine’s visit was held on Tuesday to accommodate his schedule. He arrived in the National Capital Region to prepare the dinner for the USO Metropolitan Washington-Baltimore’s 34th Annual Awards Dinner on Tuesday evening at the Renaissance Arlington Capital View Hotel in Crystal City, Va.

Michelle Shortencarrier, communications manager for USO Metropolitan Washington-Baltimore, which is based at Fort Myer, Va., said the annual event honors military personnel and civilians for their contributions to the military and military families.

Irvine received a merit award from the organization in 2013.

The Robert Irvine Foundation, which he founded, is a nonprofit that supports military personnel and their families. Shortencarrrier said Irvine participated in several USO tours overseas and traveled to Kuwait, Japan, Iraq and Afghanistan.

The chef, who is known for his fit physique and outgoing personality, advised Fort Meade’s spouses to set aside one hour each day to exercise.

“I truly believe if you spend one hour a day to exercise, it’s your space,” Irvine said. “It doesn’t have to be at a gym. You can take a walk.”

Irvine said just 20 minutes of exercise at a moderate pace can lead to weight loss. He advised against running on hard pavement because it is hard on the joints, and he suggested using light weights with multiple repetition. This can lead to lean muscle mass.

Exercise, he said, reduces stress, which is common for service members and their spouses.

Stress and lack of sleep can lead to “bad decisions,” Irvine warned.

“Eat every two hours or else you’ll get cranky,” Irvine said.

To encourage family members to eat more vegetables, Irvine said spouses should try slicing broccoli and cauliflower stalks, sauteing them in grapeseed oil and sprinkling them with spices.

He said children will love carrots baked in the oven.

Carolina Juday, a military spouse, said it was “awesome” to have the opportunity to meet Irvine.

“We watch the Food Network religiously in my house,” Juday said. “He’s [Irvine] passionate. He’s a good cook and he’s good with people.”

“I’m not really starstruck, but it’s good to get a break and have someone come out and show their appreciation for the military,” she said.

The Fort Meade Run Series kicked off April 23 with the Earth Day 5K Run/1-Mile Walk. The Earth Day event was the first of seven in the series, which is sponsored by the Directorate of Family and Morale, Welfare and Recreation.

The series, now in its seventh year, runs through December. Held every month — except July and August — each run is tied to a particular theme and includes a 1-mile walk. All events in the run series are open to the public.

The rest of the Run series schedule includes:

• The Army Birthday 5K Run/1-Mile Walk: June 11 at 8 a.m. at the Fort Meade Pavilion, near the Llewellyn Avenue gate

Preregistration for each run for individual runners is $15. The family rate (three to six runners) is $45. All runners get special T-shirts for the runs.

Preregistration group rate (seven to 10 runners) is $85. The preregistration cost for an individual to participate in all seven runs is $80.

Compiled by staff of the Fort George G. Meade Public Affairs office. For more information about what is happening on Fort Meade, visit www.ftmeade.army.mil and on Facebook at www.facebook.com/ftmeade.